How to mix Electronic Dance Music EDM Loud and Clean

This is a fashion issue in sound and the personal choice of an exact producer whether they should push the whole loudness potential out of music upper the last drop or keep the natural dynamics. But as incredible loudness remains “must have” for EDM genre, let’s sort out such a tricky question how to mix EDM loud but still clean.

So, without further discussions, let’s come to the point:

1. Sidechain is the key

You have noticed that 99.99% of all reeeally loud EDM songs have a standard structure: Kick striking in each quarter note and sidechained Bass playing precisely in the middle between Kick’s strokes.
Yes, yes, sidechain is a technique of giving dynamics and groove to a track that will eventually be flattened for cherished -7 -6 dB RMS.
But! This is also a technique of achieving incredible loudness without artifacts. Kick and Bass are indeed mix elements that have the greatest energy. And there aren’t any tricks during music mixing and mastering services which will help to avoid distortions when they hit the limiter hard simultaneously. While splitting them over time, you decrease the burden on the limiter and save up to achieve the greater loudness maximization!

While mixing and mastering EDM music, you should give particular attention to Kick as it’s both a key mix element and is often a layered instrument in work with which there are some nuances.
First and foremost, it’s a phase!
If separate layers of Bass Drum are out of phase, so called phase cancellation of sound sources appears. This effect can easily be estimated by the ear. Let’s suppose, the main layer is playing (synthesized from Sine waveform). When you switch on the second sample, the Kick sound turns weak and loses loudness and punch. It’s impossible to correct this defect by just boosting Kick loudness! But it’ll anyway be inexpressive, and eventually insufficiently loud. 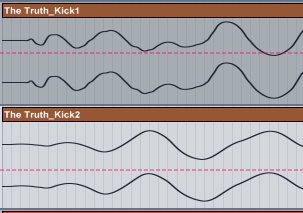 This issue can be fixed by two means:
- inverting polarity of one of the samples (if layers have opposite phase). Any plugin with phase inverting option will do the job.
- shifting one of the samples in time to get the best Kick sound in the mix context. Use your eyes as a starting point only and make final decisions basing on how to your ear Bass Drum works with other sounds of the song.

In EDM mixing and mastering as nowhere else, everything complies with feasibility requirements. In practice, it means that to form a sound of any instrument either Kick or Synth is enough maximum three layers:
- foundation or “body”;
- the layer which is responsible for mids filling;
- the layer which is responsible for upper frequencies; in case of Kick, it’s Click. 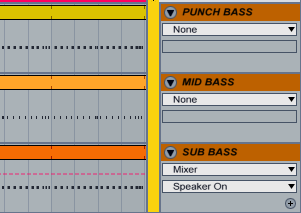 If, let’s suppose, the sound of Kick mids doesn’t suit you, and you have to pile up several samples to give necessary character, you are likely on the wrong way. In addition, the more samples you layer, the more chances you have to get problems with the phase. Than just stop and change your approach. When you select a more appropriate sample and its processing, you will by far improve the result. Quality should be your aim, not quantity!

It’s a worse solution just to squash the track with a limiter to the necessary loudness. Firstly, it will definitely lead to distortions and on the whole to a dead mix sound. Secondly, professionally mixed tracks will still subjectively be louder than yours with the same measures data. That’s why serial compression (of separated instruments and overall mix) is often used in electronic music mixing when every next compressor slightly increases the sound loudness, and, in total, there will be incredible sound density without artifacts and distortions.

- HOW TO REMIX A SONG

- HOW TO PERFORM ELECTRONIC MUSIC LIVE

- WHAT IS MID SIDE PROCESSING

- ADDING DYNAMICS TO A MIX IN 1 STEP

5. Maximize and Clip in stages

If your goal is super loudness, put it already at the production stage as a sound design element. Maximize or Clip synthesizers hard from the very beginning. Firstly, it’ll allow you to additionally reduce the  burden on the final maximizer. Secondly, due to little distortion, caused by Hard Clipping, Synths will get even more character and specific color.

If everything was properly done at previous stages, to get mastering EDM music 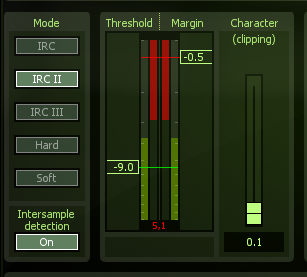 really loud isn’t enormously complicated. By applying quite careful by today’s standards maximization, you will get -9 -8 dB RMS without effort and will still preserve song
sound so far dynamic. The burden on the limiter has indeed been decreased considerably due to the Kick and Bass separation over time.

Then some nuances can turn up. It’s sometimes enough to refine the mix to the desirable loudness with single limiter at the end of the master chain, but the second limiter with more partially executed settings can be needed to make the maximization consequences less noticeable. In any case, total maximum value of gain reduction won’t exceed 6 dB. As a final touch, you can use multi-band compression to fatten up necessary frequencies. If it also appears to be little, use parallel compression just ahead of maximization – it’ll make the track “jump” out of loudspeakers even more!

As you can see, the issue peculiarly of loudness in EDM music mixing and mastering services is solved by means of complying with quite intelligible and simple recommendations. Above all, in the pursuit of high RMS values, remember that, nevertheless, the idea in music is first and something special, sort of spice added by the producer but not loudness. An uninteresting (yet loud) track won’t make the audience rock the dance floor, it can be technically mixed though.