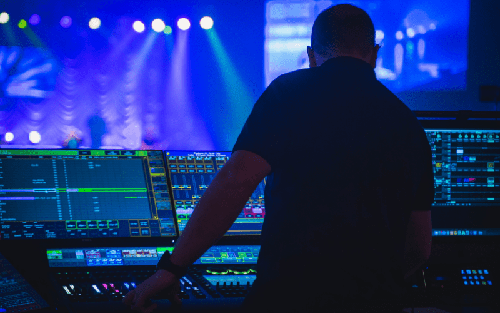 stands in the middle of the stage, and loud music, such as drums or wind instruments, often sounds in the back rows.

Suppose you have recorded audio tracks of individual musical parts. You need to distribute them in such a way as to create a sense of space, like seeing a band or orchestra playing. That is, mixing is necessary.

Here it is important to maintain three spatial dimensions: depth, width and height.

The further away the sound source is from us, the quieter it sounds. By using the volume fader you determine the volume and thus the distance of the sound source in relation to other sound events. You can also use a reverb device. This is an effect device that simulates a hall or a room. With this effect, you achieve that your signal is in front or back of the room.

For a holistic perception of music, it is important that all tracks are located in the right place. The drums will be more in the middle, and the vocalist and guitarist should be clearly visible from the front. The singer stands in the middle, the guitar can be placed a little to the left or to the right of the singer. The bass is usually placed in the middle with the drums, and the keyboards form a counterpoint to the guitar. The more sounds in a project, the more difficult it is to pan them.

In audio engineering, we talk about low and high frequencies. Between them are the mids. High notes tend to float overhead, while low notes are literally above the floor. Knowing this, you can make your tracks balanced with an equalizer. In addition, the equalizer is used to emphasize the character of each instrument.

One of the most important tools in mixing is the compressor. It allows you to change the contrast between the loudest and quietest parts of the track. In other words, the compressor is used to make the signals more homogeneous and therefore more understandable.

Depending on the musical genre, the type and style of mixing vary. Techno and hip-hop are much more bass-heavy than folk. And the blues is much more dynamic than rock. Each musical style has its own characteristics. plays an important role and

the listening environment. Pop music should be playing in the car with the engine running club - breakbeat.

But back to the mixing process itself. Is there a uniform order in mixing? No. There is no single, so to speak, correct order. In fact, you can mix your music in the order you want. However, some rules are still worth following. Put only one instrument per track in the mixer. Group similar tools, paint them with certain colors. Use the equalizer to remove the resonances of the respective tracks. If individual sounds are knocked out of the mix, apply a compressor to that instrument. Experiment with additional effects such as reverb, delay, chorus, filter, etc.

e. At the end, you can add surprises with additional effects.

And finally, you can export your track and send it to a specialist for mastering. And only after that, you can send your creation to the people. We wish you success.