How to achieve an ideal tone of guitar distortion

READY TO GET AMAZING SOUNDING MIX?

Today I’d like to throw a little of sunshine on such an interesting and complicated subject matter as sound alchemy of guitar distortion. At first glance, everything is quite simple – it’s sufficient to connect an electric guitar to an amplifier, turn up gain to your taste and it’s all over! But if you have already completed the beginner stage when he is content with such a primitive subsequence, and your trained hearing desires more – then let’s make sense of details how mechanics of guitar sound work.

Let’s start with evident things. Apart from the instrument itself, you need an amplifier (a so-called guitar amp head) and a guitar cabinet – in plain language, an acoustically designed box with speakers. The same two components are basic to shape the final tone of guitar distortion.

Exactly it sets the

basic character and the tone of guitar distortion. Distortion aggressiveness, “grit” size, focusing on one or another frequency range and, let’s say, compression level of these frequencies – the guitar amplifier solve all this. You can correct these parameters to the exact task or the desired sound tone a little – but you can’t change the character of distortion totally! That is why you should start the building up guitar sound chain precisely with an amplifier. Define clearly your task and select the most appropriate amplifier.

The cabinet goes next, 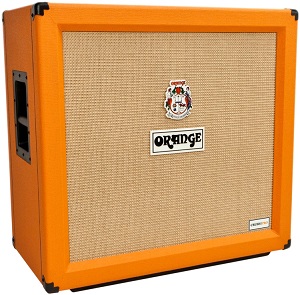 this component is as much important as the previous one. Its acoustic structure along with built-in loudspeakers totaled up plays the role of an equalizer with a very complicated envelope form. While going through this living equalizer, distortion sound gets a specific recognizable tone. No processing in the cabinet of different structure will let you achieve the same tone. The recommendation is the same – try to select a cabinet whose sound corresponds your perceptions about the desired sound at most. Afterwards, you can correct it by enhancing or attenuating some frequencies. Nevertheless, the overall sound character remains the same.

Then the very true alchemy will start! It’s in principle impossible to describe all probable options, but I’m trying to clarify basic moments that influence the final sound of guitar distortion. Keep them in mind for your own searches for an ideal tone.

There is a well-known 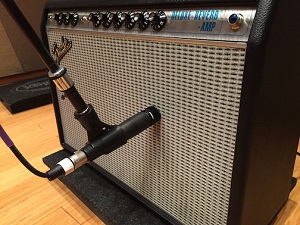 technology of electric guitar recording used for decades when the sound at the outlet of the cabinet is recorded with a microphone (or two mics and more) placed close to speakers in a particular way. So, the type and the position of the microphone have tremendous bearing on how the record will sound. There is completely standard technique to get fat and juicy sound of guitar distortion; you should place the first microphone accurately opposite the speaker center of the cabinet (here, the most vivid sound “lives”), and the second mic – at the periphery where the speaker gives foremost low frequencies. Exactly the combination of these signals in the proportion of around 50%–50% adds rich sound to guitars – fat, nevertheless, clear and easy-to-read in the mix.

It’s still all understandable, isn’t it? Yet imagine that:

- you can use microphones with a small or large diaphragm

- you can place them as closely to the speaker as possible by using maximum of their sensitivity; or move them 2–4 inches away by using the restricted sensitivity radius of the microphone as an additional instrument of sound color

- you can place the microphone at an angle up to 45 degrees towards the speaker by selecting what frequencies to lay emphasis on as well.

There are already plenty of options as you can see!

simplest tool, which literally every guitarist has, to shape the sound. In the meantime, you often simply forget about it. The tone knob built in each electric guitar represents a shelf equalizer. There is no equalization in the mid-position (knob position 5 if there is a scale), and at the output, the guitar gives, let’s say, its own basic tone. While turning the knob in the side of increasing (up to the uttermost position 10), this simplest equalizer enhances the upper part of the guitar range. While turning to the opposite side, the guitar sound gets much duller. And sound tone at the output of the amplifier in fact directly depends on what signal was sent to the input! That is why, while starting setting, make sure that the tone knob is in the mid-position. Then if you feel lack of something, you can turn it to one or another side. For example, to turn the knob to the side of “darkening” is an excellent and simple way to make the guitar sound less screechy. On a high sounding solo, there is probably point in turning the tone knob to zero position for more warm sound!

While developing the theme of preparing the sound to turn into trendy aggressive distortion tone, I’d like to be digging more into processing that precede the amp head. Whatever you process with hardware devices or with the help of plugins, its key point remains the same.

This method helps you to set tonal balance of distortion guitars even much finer and is in fact the development of the previous item of the article. While enhancing or attenuating a certain frequency range, you can enhance emphasis in the final sound.

For example, the frequency attenuation in the region of 4 kHz by 1–3 dB on the DI track will allow you to reduce the sharpness of rhythm parts and to give them more depth. It’s possible to add (or replace) this technique by making small enhancement in the range of 80–120 Hz.

As always during work with sound, the difference “before and after” will be fairly subtle, but exactly the set of such small steps is the right way to the perfect sound.

The sound of contemporary trendy guitar distortion is as a rule notable for high density. To achieve it is seemingly simple – to turn up gain on the amplifier more and to finish compressing all this with a compressor. As the result, you will get too dull and lifeless sound. However, there is a solution – compression not after but before the amplifier. In the meanwhile, it’s beneficial to use a valve compressor or its emulations – their own saturation, on top of that, will play the role of warming up and will add slight distortion without damaging the guitar sound with an excessive gain level.

Here, there is no need to explain in more details – the use of slight distortion with the help of the pedal Ibanez Tube Screamer (or its software emulations) before the amplifier became a commonly-known technique.

We can also attribute the use of boosters here. In both cases, the purpose of processing is to prepare the sound for basic processing with an amplifier by adding slight distortion beforehand.

Finally, the simplest but quite effective!

While controlling the level of the input signal, you can regulate distortion character significantly without changing gain value for this purpose. You can get more aggressive distortion, in the meanwhile, without depriving the guitar of liveliness and energy!

6. Processing after the amplifier.

At this, as a rule, final stage, it refers to cutting unnecessary resonances with an equalizer and shaping a final tone. Read about it in details in the article How to equalize electric guitars distortion

The further processing with compression (including multiband one) already falls into the task to get the guitar seated in the exact mix.

As you see, shaping guitar distortion is the true sound alchemy, and, at first sight, a great number of options can beat you out of reason. However, it’s nothing to get scared! With experience, you will sort out the role of each kind of the described processing and will learn to feel whether you need it or not in the exact case. To begin with, keep experimenting – now you are familiar with all necessary instruments!