How to mix backing vocals wide

How to mix backing vocals wide? It would seem that it’s all simple: you have a set of perfectly recorded backing vocal tracks (BV), and it’s enough to place them into a session and pan the tracks rigidly to the right and left to make them sound really wide!

Definitely, this simple way will instantly give a deceptive sense of width. However, when you compare it with professionals’ mixes, you’ll clearly notice that their backing vocals are anyway much wider, literally at the sixth sense level. Professional mixes, however, have it wider, richer and livelier.

So, how exactly professionals get such results and what is worth adopting from them in order to mix backing vocals wide indeed?

The sound difference between the right and left channels is the key to the width in music mixing! So, while placing backing vocal tracks in the space, make the panning value for the right tracks a little more or less than for those which are to the left.

The same principle as with panning. You don’t need to strive to completely equalize the right and left channels against the volume. A small difference (up to 1.5 dB) will enhance the sense of difference between the right and left sides as well as the subjective width of the backing vocals in the mix. 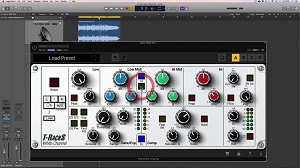 There is another important detail. In whatever way you work at the panning and the volume, if the same performer has recorded all the vocal tracks, they will be almost timbrally similar signals. And, as you know, it doesn’t contribute to sound difference as well as the width very much. So, how to fix such a situation? The saturation of some doubles of the right and left (but on no account, both) channels can help out with solving the problem. Depending on the situation, you can use either a saturator or emulations of vintage equalizers. The latter option is appealing due to the possibility to additionally change frequency characteristics of certain tracks. But do not get involved in this method too much – such correction on one or at most two tracks was usually sufficient for me.

- HOW TO RECORD VOCALS ON CELL PHONE

- HOW TO MIX RAP VOCALS ONTO AN INSTRUMENTAL

- HOW TO MIX RAP AND HIP-HOP VOCALS: PREPARATION

- HOW TO MIX RAP AND HIP-HOP VOCALS: COMPRESSION, EQ AND DE-ESSING

- HOW TO MIX VOCALS WITH MUSIC BETTER IN 1 MINUTE

This well-known effect can be a finishing stroke in backing vocal mixing. It brings a small modulation (with the frequency not more 1 Hz) that will noticeably give movement and add the sense of width. This technique is optional. Whether to use it or not, it’s a matter of personal taste. If you’re in comfort with specific flanger sound on backing vocals, use it safely!

As you see, there isn’t anything complicated! Take a note of these simple techniques, and let your next mix be better than the previous ones!

If you liked the article, please learn EKmixmaster's pricing for mixing and mastering services.