How to choose speakers for music mixing?

Almost all monitors share a range of common drawbacks in terms of playing sound, and that will inevitably influence the decisions made during audio mixing services work. That’s why these drawbacks deserve special attention. Some of them will be definitely present in low-cost models (typical for affordable mastering studios), but an acoustic system with too much of these flaws certainly doesn’t belong to the professional sound mixing facility.
Try to notice if a dull, slow and boomy bass sound is present. Colored, incoherent bass without a distinct tone is an extremely irritating characteristic of bad monitors. Professional studios speakers should play bass with a clearly audible pitch, not with a low-frequency hum of a single note with the music in the background.
Upper bass can be evaluated by listening to male speech. It shouldn’t contain accentuated or unnatural side tones similar to sound “from the box”. If it does, that’s exactly how your mix is going to sound.
Separate bass notes shouldn’t be louder than the rest of the sound. If a volume of a single note differs from the other ones, it may indicate a problem with this frequency. When such monitors are used for mixing and mastering, defects are inevitable.
Deep bass sound must be quick, clear and have a decent density level. Quality is more important than quantity when we are talking about the bass.
If you want to know how bass must not sound, listen to the bad car subwoofers. Car audio systems emit maximum sound power on a single frequency; they are not designed for articulate melodic bass.

Unfortunately, exaggerated bass usually points to the bad sound quality on these frequencies. This mostly applies to monitors in low and medium price range which makes them inappropriate for use at CD mastering. Their bass is weak, dense and badly articulated. Such monitors are not suitable for mixing and mastering prices.
Listen to the combined sound of a snare drum and a bass guitar. The dynamic bass sound of a drum should be perceptible behind the bass guitar melody. Drum sound must be rhythmic and shouldn’t be late relatively to the bass guitar. Equipping your studio with such monitor will definitely help in your online mixing service promotion.
If monitors are not reproducing the rhythm powerfully enough, the sound will be withered and even slow to ear.
Some monitor models (mostly cheap, but not always) feature a particularly irritating coloring of medium frequencies. Even nowadays monitors with colored sound are not rare. They are characterized by specific voice part sounding, which resembles a voice of a person speaking through folded palms. Nasal sounds and emphasis on some vowels are also common.
Another common thing is a small lift in this range, which is characterized by ringing metallic piano sound.
A quality studio speaker plays voice parts clearly and audibly. While listening to them, you get the feeling that they exist separately from the acoustic systems.
If there are any problems in playing middle frequencies, it will be harder to perceive music the right way. It may seem that sound comes from the devices’ casings instead of forming in surrounding space.

Low sound quality of high frequencies is often accompanied by the “sandy”, dirty sound of violins and cymbals, as well as the overly highlighted sibilants (whistling sounds in voice parts, like “s”, “sh”, and so on). If you use such systems for mixing and mastering rap vocals, you will have a hard time evaluating your work.
Cymbals distort the whole soundstage with the slaps resembling explosions of a strange white noise. Their right sound must have a certain delicacy, texture and tone. A good sound means a balanced combination of high frequencies with music, in which they don’t attract attention. As a mastering engineer, you have to be careful if you notice that monitors pair play high frequencies as a separate part of music.
Apart from everything else, special attention should be given to the monitors’ capability of playing high volumes without overload. Some models sound perfectly on low volume, but if you turn it up, they start yielding distorted sound. 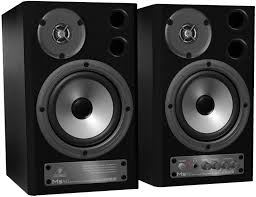 Listen to the music (especially classic) during loud, complex parts – it shouldn’t crumble and have a gruff tone.
And finally, a necessary requirement is “dissipation” of monitors in sound stage. A pair of high quality monitors should unwrap music in the mix and master online studio environment, so you won’t even notice that sound actually comes from two wooden boxes.
In that case, performers have clear, tangible images, which appear between the monitors (if sound was recorded exactly that way). The instrument also shapes into such an image and has its own place in the sound stage without drifting anywhere when registers change. Music has to be open and transparent. Any fogginess, blackness or opacity is unacceptable.