When you arrange monitors in your mixing hip hop beats, you should strive for achieving two results: the smoothest possible Frequency Response Function and the best playback of a stereo picture.
Even if you have good monitors, you should always take the influence of the room into account. And believe me, it’s by far more effectively to get down to acoustics of the room and proper monitor arrangement rather than pay double for new monitors.
This article deals with basic principles you should follow while setting up monitors in your studio.
1. The symmetry of the walls behind monitors and on each side of the monitors is quite important. Less significant is the circumambiency next to the sound engineer. The opinion about the symmetry of back and front doors is controversial. However, most experts will confirm that the wall behind the sound engineer should have good sound-proof properties and the absence of parallelism of its position towards the front door to avoid the appearance of standing waves.
Professional engineers recommend damping the entire area around monitors to reduce reflections at most to get sound quality similar to followed examples of music mixing work. It’s worth remarking that damping of side walls only in front of monitors is important to minimize reflections from side walls.
The symmetry between monitors and around them will lead to better playback of a stereo picture. In other words, when monitors have been arranged unsymmetrically, the difference between reflections from the back door near the first monitor and reflections near the second one will be noticeable. It will lead to distorted perception of a stereo signal while mixing and mastering.

2. The sound engineer must be exactly in the middle between monitors, and the distance to his head must be equal to the distance between monitors. This rule is also called “the rule of an equiangular triangle”. When the distance between monitors and the engineer is too long, the acoustics of the room will affect the sound to a greater degree and along with this especially midand high frequencies. And when the distance is too short, the sound won’t be in time to transform into an aggregate sound picture.
3. When you work with dual band monitors, the position of ears heightwise should be on a conditional line between LF and HFspeaker, and when three band monitors are used – on the line between MF and HF speaker.
If you place monitors too low or, on the contrary, too high towards your ears, you take a risk of getting distorted FRF.

On the whole the height is one of the most crucial factors when you set up monitors in your studio. Only after you have chosen the right height through an experiment, you can estimate properly the sound of the audio material played back by monitors. It’s also fair to say that it’s very important to fix monitors securely. Secure fixing of monitors will bring about getting accurate sound focusing, especially at high loudness.
4. Diffusion and absorption of the sound in the room of a playback session has a significant impact on fair play of the monitor sound and as consequence on the quality of the services rendered by professional mixing studio.
The bulk of sound waves are reflected in a random way. The sound is diffused by hard and curved surfaces whereas soft and spongy surfaces, on the contrary, absorb it.

To a greater extent the quality of the sound of low frequencies depends on the size of the mixing vocals over instrumentals and the arrangement of monitors. It’s explained by a large length of LF-waves on which materials of walls, the floor and most ambient objects are almost out of power to have influence. When LF-wave hits an obstacle, it is almost all reflected back.
If you use a subwoofer along with monitors, you should place it at an equal distance from the three nearest side surfaces of the room as some low frequencies are enhanced by the reflecting surface which is the nearest to the subwoofer.
When reflecting surfaces are at an equal distance from the subwoofer, the enhancement of some low frequencies will be excessive what can bring on a powerful rambling at these frequencies. 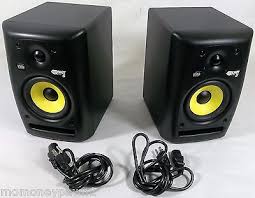 With the help of proper arrangement of monitors in your studio you can regulate LF-reflections and resonances to a great extent. With proper position set you'll be able to achieve sound quality like in the following demos of music mixing and mastering.
You should pay special attention to the distance between monitors, the front and back door. The more nonparallel and geometrically different the front and back door will be, the less undesirable resonances will be from emerging standing waves that cause unacceptably gross distortion of FRF.
5. To define the best possible distance between monitors, the audio engineer should play and listen to recording distinguished by good focusing of the central image. Set monitors at the distance of nearly 1–1.2 m from each other and point them at your head.
You should give it a listen whether the sound has been focused properly. Increase the distance between monitors by 10–15 cm and listen out again. Keep repeating these manipulations until the center of the stereo picture starts getting fuzzy.

In this way you’ll find out the maximum allowed distance between monitors in your case without losing the density of the central image and with reserving a balanced stereo picture.
6. When the sound spreads irregularly all around, and its focusing is bad, you should reconsider the distance between one of the monitors and your head. Surprisingly, but engineers of mixing backing vocals notice that the difference in a couple of centimeters is often quite noticeable during listening.
7. The displacements of monitors to the sides affect the perception of a low-mid frequency range much more; forward-rearward movement has an impact on the perception of a low frequency range.
8. When you set monitors, you should take their tilt angle into account. Forward and reverse tilts can significantly affect the sound.
9. When you set up monitors in your studio, you should pay attention to its orientation. The pair work is desirable to regulate this parameter.
First, you should point the monitors at the back of your head whereas you keep the equal distance between your ear and the speaker of each monitor. During playback of the signal you should concentrate on the focus, and your assistant standing behind the monitor should rotate it around its axis. After you have found the best position of the first monitor in your studio, you should set the second monitor in the same way.
Keep in mind that some monitors work better when they are turned inward, others don’t. But if you have doubts in which position the sound is much fairer, it’s just recommended to turn monitors inward a little.