Mastering is really a wide-ranging topic in particular for those who are just starting to penetrate into the art of an mastering music. That’s why I’d rather divide the subject into some sub-themes dealing with each stage (or more accurately to say with each aspect) of this complicated and by far important music production process. We’re going to take a closer look at nuances, causes and aims of each processing there.

Let’s start with a bus compressor used quite often as the very first link in a finalizing chain. It has derived its name from the process throughout which the whole track is being treated and placed on a master bus. Almost any compressors can be used as this one if the kind of their work answers the engineer’s intentions.

Wherever on online mastering services you use a compressor, its main purpose is to reduce an audio signal dynamic range. Apart from the technical specification of peak limiting, it can also change the sound character considerably as well as the way in which our ear perceives it. Compression is also widely used in final processing of music material.

Let’s not get into the details of sound dynamics and loudness boosting accessible due to compression. Now almost everybody has an access to a great choice of compression/limiting (and so on) plugins. Yet you need to realize that the accessibility of these devices for each online audio mastering service doesn’t mean that you are bound to use all of them when you are solving a particular problem of yours.

First of all a bus compressor is aimed at adding homogeneity to the final track. Its purpose is also to “glue together” separated instruments of a song as a whole. Even if the mastering service engineer has done his best to add some cohesion into a song at the mixing stage, bus compression applied carefully can emphasize the effect a lot more. It will level the song dynamics so that the difference between the quietest and the loudest parts will be less noticeable. To suppress excessive peaks is also important as it can play a positive role during future processing by allowing the next dynamic processors work more smoothly. Such approach is called serial (or batch) compression and used pretty often by dance music mixing and mastering services engineers.

What else is it necessary to take into account when you’re choosing any hardware or VST processor model? It’s the way the compressor affects sound character and tone. If possible, the mixing mastering studio should be equipped with different kinds of such devices to be capable to maintain the most flexibility of workflow.

Each engineer chooses the kind of a compressor needed for a master bus for his own reasons. Today there is a great variety of either hardware or program emulations of vintage equipment available for every studio. Every year the quality of their character is growing. But it’s quite difficult to measure the device characteristics in all modes so that in the future they can be turned into a digital code transmitting details of the progenitor’s work flexibly and accurately. The choice of the particular model is getting crucial for most mastering engineers. For more help please learn for yourself our mixing mastering services rates.

Why ever are emulations of hand-me-down analog devices so popular both at online audio services and home studio engineers? As a matter of fact each DAW initially already had its own set of plugins-compressors, equalizers and so on which would seem made it work good for mixing hip hop vocals. The matter is in “fatness” and “warmth” added to the sound thanks to the chains of transistor and tube technics. It makes it be so desired in each studio.

In fact the degree of the magic “something” given to a sound by analog equipment is pretty small. I’d even rather say it’s hardly noticeable. In technical terms notorious warmth means a degree of saturation, a bit of modulation and a slight signal shift in phase. It’s also important that in contrast with 100% digital circuit technique its analog equivalent brings along random abnormalities, irregular variations which literally “tickle” our hearing and make us opt for hardware. Therefore, professional mastering studios are always 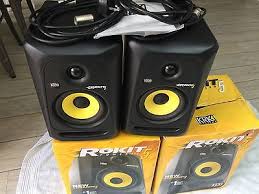 equipped with analog hardware and its emulations.

If it’s necessary to add some flavor (or say character) during the work, engineer should definitely make a choice toward vintage devices and emulations. (How that works please hear in our mastering services demos.) Due to processing transparency digital compressor plugin will do best of all. Now most DAW available for engineers are equipped with properly sounding digital plugins of dynamic processing and even with physically modeled vintage compressors.

The engineers who are going to launch their own studio in the future and are still looking into the specific character of mastering often wonder what processing sequence is like.

They’d like to know in particular when a bus compressor must be applied. Without doubt in most cases it should be first included into the chain as it can insure to get more density of an audio and suppression of peaks without breaking disbalance. Consequently, it also insures more perceived loudness of the finalized project.

Nevertheless, there are situations when it isn’t first in the chain. The simplest situation is when the hip hop mixing and mastering engineer isn’t satisfied with the first step of compression and he makes up his mind to apply batch processing, one plugin of dynamic processing after another. Instead of the first step a limiter can be used as a version to cut hard all the peaks whereas the track sound is being compressed by the compressor put second. Any version is much more preferable than the attempt to level the dynamics of the track with too large peaks by one dynamics processor with higher reduction aggressiveness.

4. How far important is right setting?

Subtlety is a key concept during bus compressor adjustments. The engineer’s work is to select numbers so that after processing the sound will be as transparent as possible without a sign of an applied dynamics reduction.

Let’s keep in mind that mastering engineering is utterly focused on careful and gradual sound polishing of separate instruments and the whole track. This is the essence of the process when step by step you’re approaching perfectly balanced sound at the stage of track release from your mastering service. Disregard of this rule and the use of overaggressive settings during master channel compression don’t look promising and can bring on pumping effect and other artifacts.

To start with selecting ratio and threshold settings will be much better. Transparency and original natural character of a song are important to us and what mastering services clients expect for. So select a small term of ratio and set threshold so that the compressor hardly brushes peaks. In this case gain reduction will be the smallest and without any audible signs of interference with song dynamics - just like in mastering demos available on this website.

Then you may start reducing threshold until audible compression turns up (the engineer’s trained hearing can easily snatch this subtle moment). After it has happened, you can begin to keep experimenting with attack and release time.
It’s difficult to give general recommendations as in your future practice you’ll come up against a wide variety of situations which are absolutely impossible to include into this article. Every experienced engineer starts feeling in advance what settings are necessary. He can order numbers in the right way at once to achieve the exact term by matching in place then. But in fact we’re just learning so don’t be afraid of experimenting. Start with both large and small terms, notice how in this case the sound character is changing.

5. Compression extension
In summery everything mentioned above deals with most cases of musicians’ traditional expectations from their favorite mastering studios. Everybody understands the concept of the “right” sound on his own and it’s so controversial that you may happen to need to make quite the opposite. For example, a smash track to have the effect of the most pumped sound, to cut all the peaks and to squeeze almost all the dynamics in favor of mad loudness. Does it sound really weird? But in most studios it comes about exactly like that, for instance, when you work on EDM songs.
There are several techniques to get this aggressively compressed sound. Out of them parallel compression is widely spread. The method depends on equipment and plugins. You can turn the knob Wet/Dry up to the necessary proportion of a clear and compressed sound or copy tracks with a processing audio. Then one of the copies is being hard compressed and blended with a “dry” track in the necessary proportion.
Let’s touch one more moment related to master bus compressors. There are often compressors among them with an additional option M/S processing that allows online audio services engineers to process Mid and Side channels separately. Due to it the engineer can set the stereo picture of a track much more subtly. But I think we shouldn’t delve into this subject matter at this stage. It’s more logically to consider it in details in the next article.

If you like what you read - please learn our affordable mixing mastering services prices.